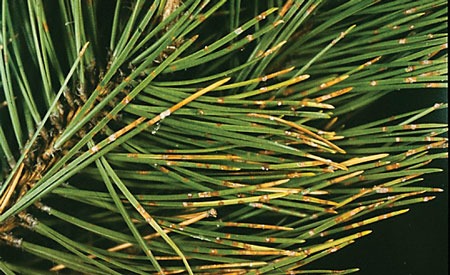 The most common biotic problem on spruce trees, which are the most common landscape tree in the upper Midwest. There are several species of fungi (Rhizosphaera, Lirula, Stigmina) that cause the common condition in spruce called needlecast. The most prominent symptom of needlecast is the premature loss of needles on the lower, interior part of the canopy. This leads to a thinner appearance on the most conspicuous part of the canopy.

Spruce trees that are stressed from drought, or poor planting practices are more susceptible to needlecast. Differentiating needlecast from the normal needle loss as spruce mature is very important to a successful treatment protocol. Needlecast treatments are effective, but they require patience. We use two fungicide sprays in the spring to protect newly formed needles. At least two, more typically three years of treatments are necessary to get adequate control of the fungus. There is simply no quick fix when it comes to spruce needlecast fungi.

Dothistroma needle cast or needle blight is found only in pine trees. It most commonly affects Austrian and Ponderosa but can affect other pine species. Symptoms show up on the inner needles low on the tree, where moisture and humidity are typically a bit higher. Dark lesions can turn into bands that are distinctive across the middle of infected needles. Promoting good air flow helps to reduce the severity of this disease, which can otherwise be fatal. Irrigation that hits lower branches can also promote the disease. Very rarely are the upper branches of a pine infected with Dothistroma, as sun and wind flow reduce moisture.

Treatments involve two well timed fungicide sprays in the late spring to early summer. Several years of treatment may be necessary depending on the severity of the infection.

Diplodia tip blight is caused by a fungus that affects the actively growing buds and needles of several pine species including Red, Austrian, Ponderosa, Jack and Scotch. This disease most commonly infects stressed trees from drought, soil or planting issues. Some research shows that it can infect a healthy tree and not produce symptoms unless the tree becomes stressed. Unfortunately, many of the pine trees in the metro area are planted under less-than-ideal conditions. Once an infection begins to kill buds and new needles, a whitish resin is produced which can aid in identifying the pathogen.

Treatment involves three well timed sprays throughout the spring and summer. Fertilization with nitrogen can make the tree more susceptible to Diplodia.

U of M: Diseases and Insect Pests of Conifers
U of M: Fertilizing Evergreens

Setup a FREE ESTIMATE with a Certified Arborist Today